¿do you know the origin of your Balfegó tuna?

Balfegó is the first company in the fishing sector in Spain to achieve AENOR certification for its protocols against COVID19. View the certificate 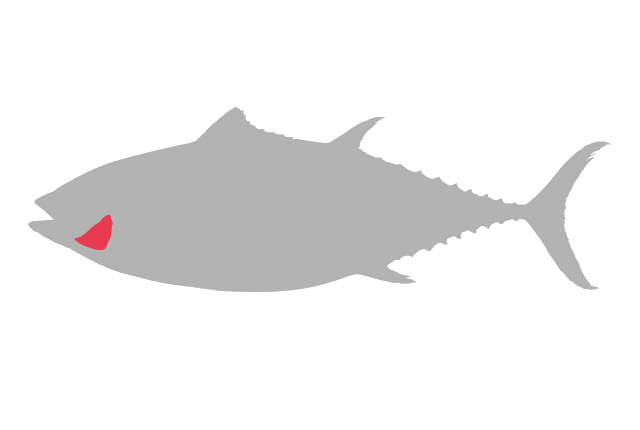 The internal side of the tuna’s face, located near the hearing area, known as the cheek.
Being more fibrous and lean than other parts of the tuna, it needs a longer cooking time to make it tender. It is ideal for roasts and stews, for example with potatoes and onions. 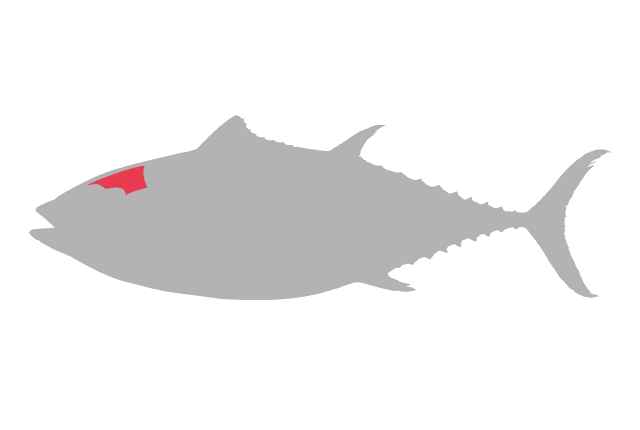 Fatty and fibrous, the “morrillo”, as it’s called in Andalusia, is the best part to can or bin in olive oil. On one hand, the high fiber content allow for a longer cooking time. On the
other, the high fat content makes for a sublime mouth feel. 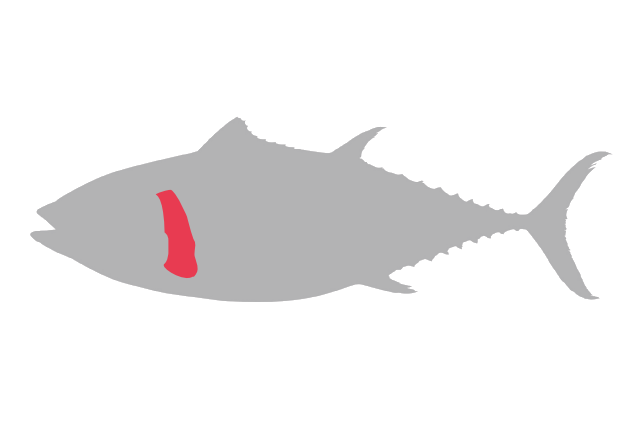 The collar is the bone on each side of the neck which separates the head and the body. It is very fibrous and has little fat, so it requries a longer cooking time than other tuna parts and other fish. It tenderizes best roasted in the oven for 30 minutes at 180ºC. 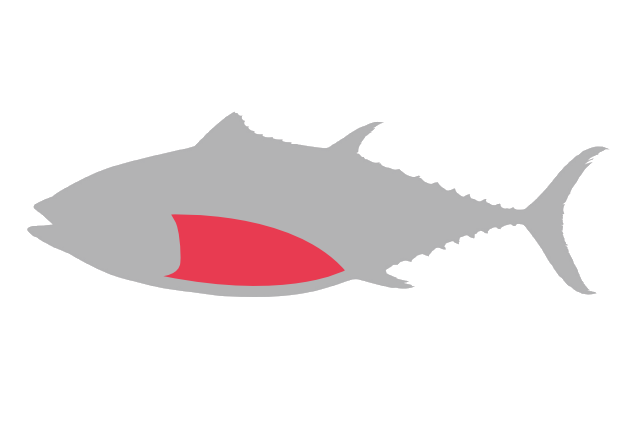 Tender, fatty and pink, the tuna belly is one of the most delicious and highly regarded parts of the bluefin tuna. It has the most desirable features of Iberian ham and the finest pork belly meat. It is known as “sorra” in Catalan, “ijada” in Spanish and, of course, as “toro” in Japanese. Eating it raw is the best way to appreciate its essence, but it can also be roasted or seared rare. 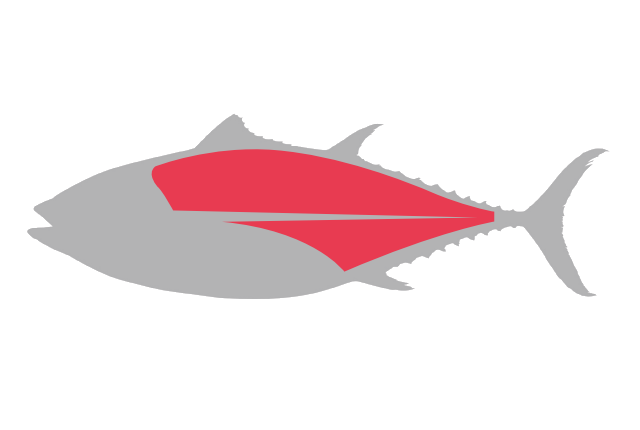 If there is an icon of Japanese cuisine, the color sought by “sushimen” and “sushiya” all over the world, that’s the bluefin tuna loin. In a “maguro” bluefin tuna, the red “akami” is as highly regarded and estimeed as the fillet or the sirloin are in veal and beef. Best eaten raw as sashimi or in sushi and steak tartar. 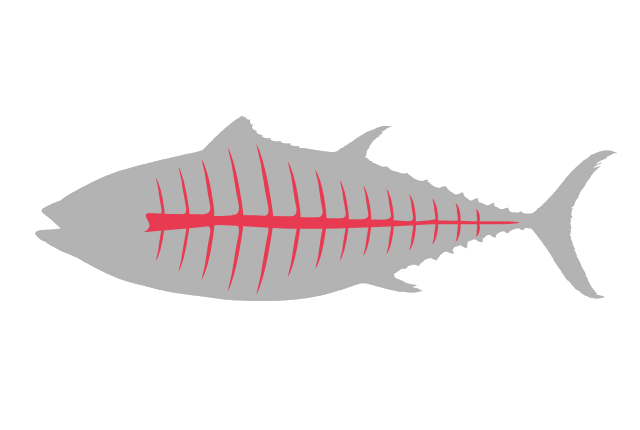 Watching a “ronqueo”, the cutting of a bluefin tuna, is a unique experience, similar to the cutting of a swine. After quartering the fish, one can see how much delicious red meat is still stuck to the fishbone, which can be patiently spooned out. The day a cutting occurs, everybody joins and enjoys a meal of bluefin tuna in spoonfulls. 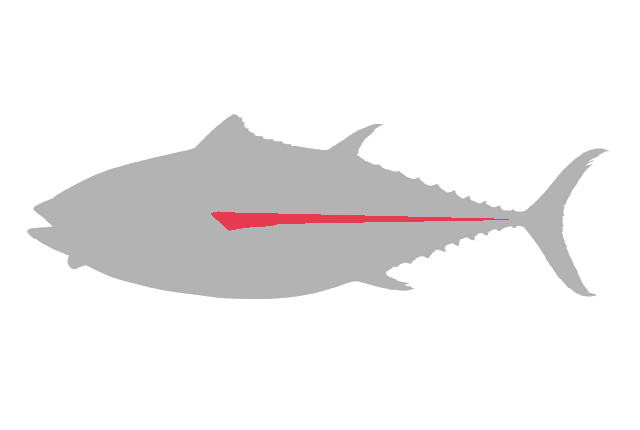 What we call the bluefin tuna’s bone marrow is the sinovial liquid that facilitates the movement of the fish’ vertebral discs. It was used first in history in 2003 at elBulli, in recipe #910 of its General Catalogue. It was discovered by chance in 2002 during the preparation by Ferran Adria’s Reasearch Team of a retrospective of their best dishes.
It was since used in five recipes by elBulli, between 2003 and 2011. It has a unique
texture that cannot be compared to any other tuna product, jelly-like, subtly flavored.
Its discoverers warn that this is a very delicate product. It needs to be separated
from the backbone very carefully so the thin bag of liquid is kept intact. Any cooking
must be subtle, no more than a mere warming, but it can be battered and deep-fried too. 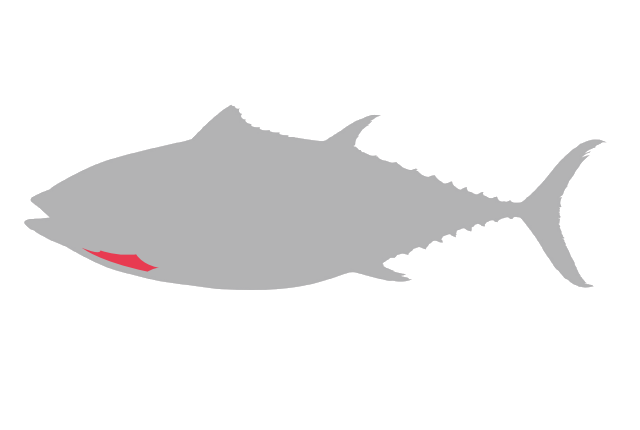 Highly regarded in the culinary tradition of the Basque Country, where it’s called “kokotxa”, the chin is the lower extension of the collar. Its fine marble lines make it a tasty and juicy treat.

Wild bluefin tunas are caught and fed a fish-only diet in order to achieve the optimal fat content that makes it such a sought-after product in the haute cuisine world.

Guarantee of supply. Our company organization makes it possible to have a year-round availability of fresh and frozen product, anywhere in the world.

The end user has full, immediate access to information about the origin,
size, weight, legal documentation and physical movements of the tuna before it arrived to their table.

The purse-seine technique is highly sustainable because it guarantees the non-capture of smaller fish and allows for the reproductive activity of the tunas even after their capture. Fishing quotas are alocated by ICCAT, a world-wide regulatory authority. Furthermore, a portion of the generated income is used to fund scientific research projects.

Bluefin tuna, scientific name Thunnus thynnus, belongs to the Scombridae family. It is the largest thunnid species, reaching up to 3 meters of length and 600 kg of weight.
Bluefin tunas have long but rounded, spindle-like bodies covered in scales.

Bluefin tunas migrate for alimentary and reproductive reasons. During their long migrations, they withstand large water temperature variations which they can tolerate thanks to their ability to keep their body temperature above that of their medium.

Bluefin tuna is a pelagic species that forms schools. It can be found both near the water surface and in depths of up to 1000 meters.

It inhabits the whole pelagic ecosystem in the north Atlantic and adjacent seas, mainly the Mediterranean.

Different concurrent ecological and environmental variables affect the choice of a particular spawning ground by the tunas. Those spawning in the Mediterranean reach sexual maturity at around age 4. At a water temperature of 24 C, embryo development is completed in approximately 32 hours and the larva phase in approximately 30 days.

The first dorsal fin is yellowish or bluish color.

The second is reddish or brownish and higher than the first.

The head is large, and the eyes, compared with the rest of tuna, are small.

The body of bluefin tuna is fusiform, long, rounded and covered with scales . It is the largest species among túnids and can get 3 meters in length and weight 600kg The structure of your body is prepared for efficient swimming.

The pectoral fins are very short.

The back is deep blue and silvery white belly.

The caudal fin has an arc.

For centuries, bluefin tuna has been a relevant item in the Mediterranean diet, thanks to its multiple properties benefitting human health.
Remarkable among its components are Omega-3 fatty acids. It is also rich in minerals such as selenium, phosphorus and magnesium, and vitamins (A, B, B3, B9, B12 i D) and makes an excellent source of high biological value protein.

It is worth noting that the content of selenium in bluefin tuna is higher than in other foods. Levels of up to 17µg/g have been found. A number of scientific studies have shown that selenium is highly beneficial for human health. This microelement is involved in antioxidative processes and can neutralize the damaging effects of mercury on health. That said, contrary to popular belief, mercury contents in bluefin tuna are well below any legal treshold.

Bluefin tuna has higher protein contents than most other fish and many meats. This makes it an optimal food for children and those who practise sports.